The market opened for a nice gain this morning before nosediving within the first 30 minutes of trading. The Dow, S&P, and Nasdaq Composite all closed moderately lower in response to better-than-expected economic data ahead of tomorrow’s rate hike.

Today’s reversal was the result of job openings data from the Bureau of Labor Statistics (BLS), reported this morning. Job openings soared by 437,000 in September according to the BLS, rising to 10.72 million total employment vacancies vs. 9.85 million expected. Quits sunk by 123,000 to 4.061 million, as quits hit their second-lowest level since July 2021.

The job openings number stunned analysts, and it was especially concerning with a Fed rate hike approaching tomorrow afternoon. It also signaled to many investors that the odds of a pivot have dropped substantially.

“Hopes for a Fed dovish pivot are misplaced if today’s job openings are any guide,” explained Lazard Asset Management’s Ron Temple in a note.

“Markets may be underestimating where the Fed’s terminal rate is and should prepare for further financial tightening.”

Fed mouthpiece and Wall Street Journal writer Nick Timiraos – aka, “NickiLeaks” – also commented on the data in a tweet this morning:

That’s enough to give Powell nightmares. An earnings slump and a tight labor market? These are largely unprecedented times, but unless inflation comes down and labor cools, the Fed likely sticks to its guns here. That means a 75 basis point hike in December and probably an end to the short-term rally. 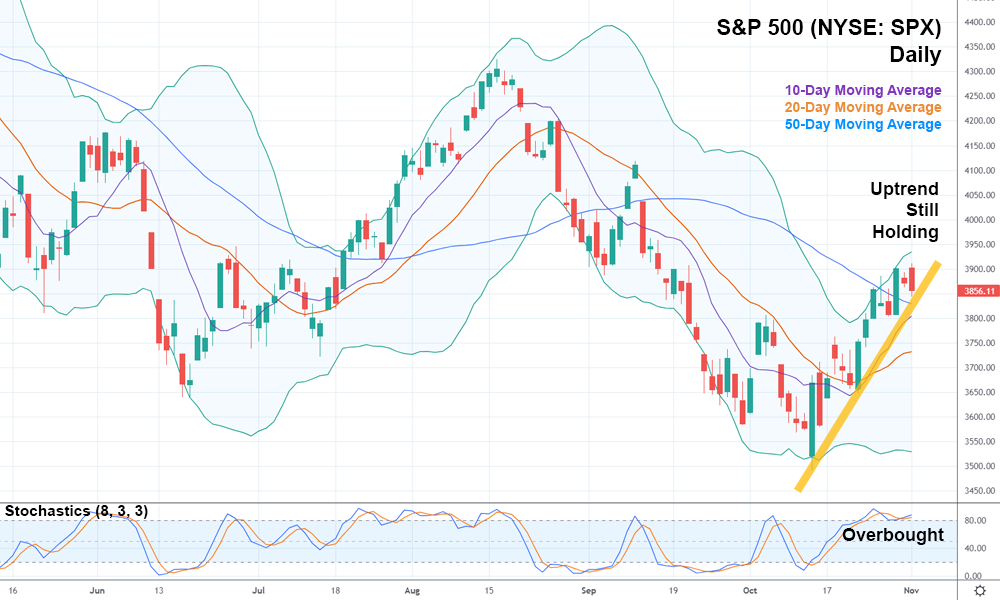 The uptrend is still intact, however, for the time being. The S&P did not break trend (yellow trendline) today despite closing lower, and it remained well above the 10-day moving average. The stochastic indicator suggests that the index is overbought, and rightfully so. But does that mean we’ll see a retracement?

It depends on how tomorrow’s post-FOMC press conference goes. If Powell makes hawkish remarks, you can virtually guarantee that the index is going to break trend and close below the 10-day moving average. That would form the basis of a short-term bearish continuation. 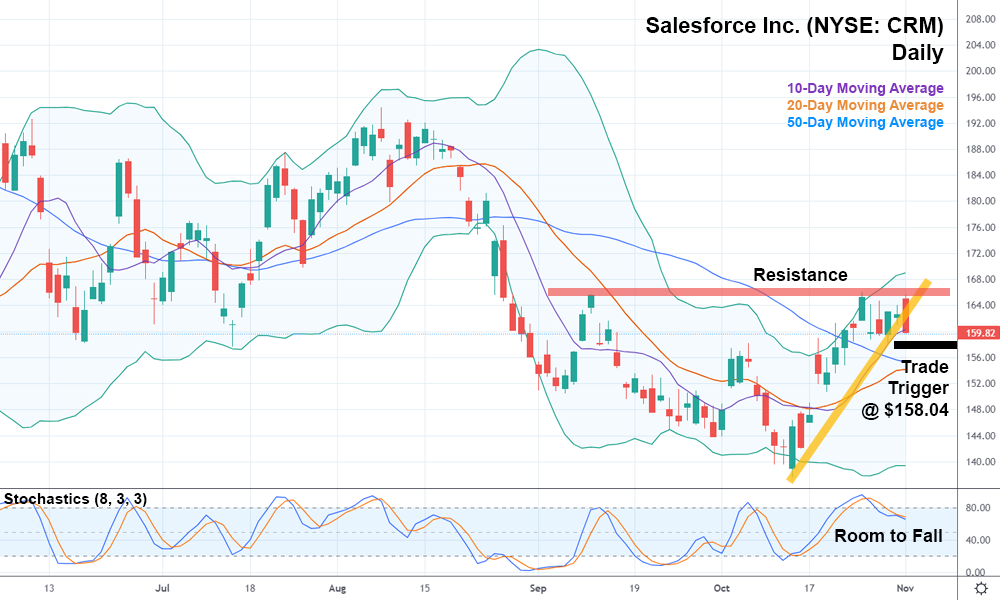 And that’s why traders may want to consider taking bear setups on stocks that are presenting them. Salesforce Inc. (NYSE: CRM) did just that today after closing below both the 10-day moving average and its minor bullish trend (yellow trendline). CRM also failed to rally above resistance (red line) after coming into contact with it twice now.

The stochastic indicator suggests the stock has room to fall, too. Considering that earnings aren’t until later in the month (11/29), traders have some time to work with as well.

For those reasons, it might make sense to take a bearish position on CRM with a trade trigger of $158.04, below today’s low, as the general market waits in anticipation for Powell’s press conference tomorrow.