Stocks closed modestly higher today after the Fed released its November meeting minutes. The Dow, S&P, and Nasdaq Composite all gained as Treasury yields slid. The 10-year rate fell to 3.70%.

The minutes weren’t overly dovish, but the lack of a hawkish surprise was enough to keep bulls happy. Stocks temporarily dipped through noon before ultimately rising again after the minutes were revealed.

“A substantial majority of participants judged that a slowing in the pace of increase would likely soon be appropriate,” the minutes said.

“The uncertain lags and magnitudes associated with the effects of monetary policy actions on economic activity and inflation were among the reasons cited regarding why such an assessment was important.”

Economists expect a 50 basis point hike in December. The minutes didn’t really give them any indication that will happen. But it also didn’t suggest a 75 basis point hike was guaranteed, either.

The market’s muted response was to be expected.

“What it really shows is you’ve got a market that’s jittery about one thing and one thing only, and that’s the Federal Reserve and what their thoughts are on monetary policy,” said B. Riley Financial strategist Art Hogan.

He’s absolutely right; nothing really matters these days besides the Fed. That’s been the case since the Fed started easing in response to Covid. 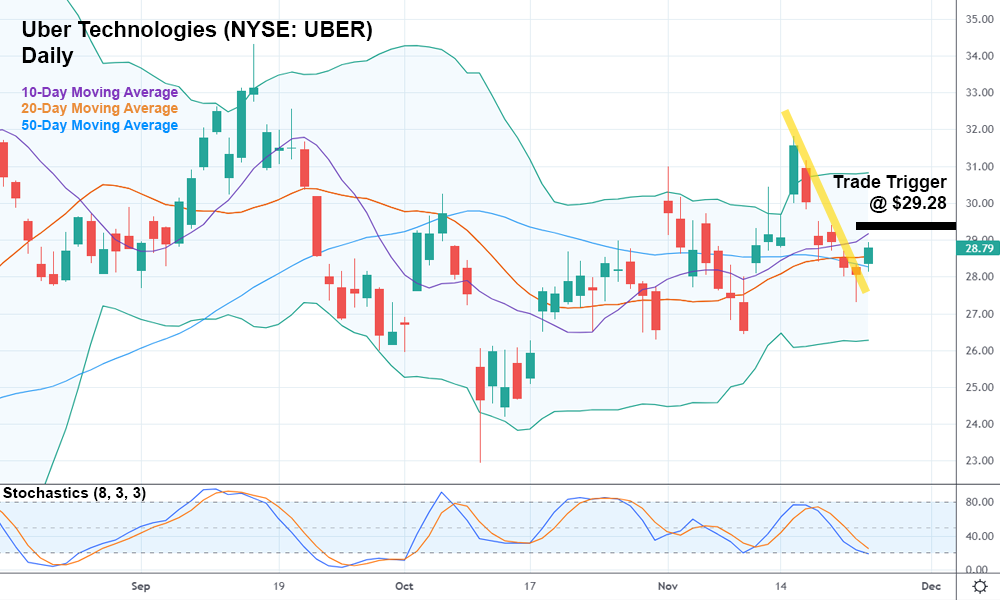 Rate-sensitive stocks like Uber Technologies (NYSE: UBER) stand to benefit greatly as the rate hysteria builds. UBER closed above the 20 and 50-day moving averages today after setting a higher low.

UBER closed above its minor bearish trend (yellow trendline), too, and the stochastic indicator suggests that it has plenty of room to run.

For those reasons, it might make sense to take a bullish trade on the stock with a trade trigger of $29.28, above today’s high, as the general market awaits the Fed’s next move.

Stocks rallied this afternoon as bulls attempted to take control. The Dow, S&P, and Nasdaq Composite all rose significantly on a slumping dollar and...
Read more