The “Health Stock” Most Traders Ignored

Stocks gained slightly today to close out an otherwise unremarkable week of trading. The Dow, S&P, and Nasdaq Composite all nudged higher. Treasury yields advanced as the 10-year rate climbed to 3.819% amid a modest bond selloff. When stocks rise opposite a bond slump, that’s often a bearish sign for the next trading session.

This week, however, seemed to only frustrate traders as stocks chopped sideways. Conflicting statements from Fed officials had investors pointed every which way.

“Following the big rally coming off the better-than-expected CPI print, the market’s digesting the current data, which is bringing things back to reality,” said Homrich Berg CIO Stephanie Lang.

“The rally that that followed the CPI print we don’t feel was justified by fundamentals… The market’s also pricing in a soft landing here, which we don’t think is likely to occur. So when you hear the Fed officials coming out and reiterating their stance you’re starting to see the market readjust to that.”

St. Louis Fed President James Bullard threw a curveball at bulls yesterday when he said that “the policy rate is not yet in a zone that may be considered sufficiently restrictive” before unveiling a chart that suggested a fed funds rate ranging from 5% to 7% would be “sufficient.”

Then, today, Boston Fed President Susan Collins said that she was confident the Fed could beat back inflation without causing a significant increase in the unemployment rate. Stocks temporarily rallied in response.

Can the Fed please get its officials on the same page here? Instead of calming markets, all they’ve managed to do over the last week is increase volatility.

“We continue to think investors should place much more emphasis on the actual data and not focus too much on Fed rhetoric (the former will show where inflation is headed while the latter is fixated on where it was),” Crisafulli explained.

“That said, investors are tired of battling the Fed’s daily tape bombs, and the fear is it may take 2-3 more CPIs for officials to stop admonishing the market every time it tries to rally.” 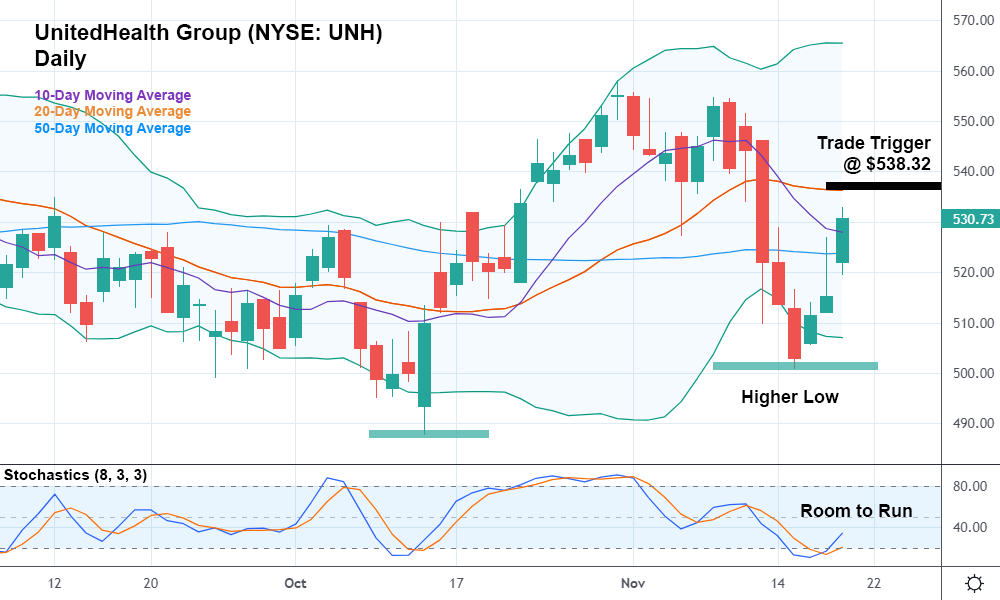 In an attempt to break free from the Fed-driven trend, traders may want to pay attention to stocks that are less correlated with the general market. There’s perhaps no better example of that than UnitedHealth Group (NYSE: UNH), which closed significantly higher today.

The stock also set a higher low this week while closing above the 10-day moving average. The stochastic indicator suggests the stock has plenty of room to run, too.

For those reasons, it might make sense to take a bullish position on UNH with a trade trigger of $538.32, above today’s high, as the general market awaits the next Fed soundbite.