“A substantial majority of participants judged that a slowing in the pace of increase would likely soon be appropriate,” the minutes said.

There were some hawkish remarks, too, but the general tone of the minutes leaned dovish. Stocks rallied modestly in response on Wednesday.

Today, however, trading volume was low, and equities refuse to budge. China’s central bank confirmed this morning that it would cut rates by 25 basis points in an attempt to stimulate the Chinese economy.

That would normally be received as bullish. The central bank also cut the reserve requirements for lenders, hoping to increase loans.

But with restrictions being reactivated by Beijing, investors have had a hard time getting excited about China’s rate cut.

“How effective [easing] will prove to be when cities are seeing restrictions and effective lockdowns reimposed is hard to say,” said Oanda analyst Craig Erlam.

“But combined with other measures to boost the property market and ease Covid curbs, the cut could be supportive over the medium term when growth remains highly uncertain.”

Meanwhile, in the US, investors anticipate a softer Fed even though its target rate has not changed.

“The Fed needs to continue to hike rates reasonably to the 5% to 5.25% levels, so there are still some rate hikes to come, so markets are a little bit optimistic right now,” said Stephane Monier, chief investment officer at Banque Lombard Odier & Cie SA.

So long as nothing drastic happens in China in relation to lockdowns, though, most investors expect the market’s seasonal tendency to take over in December.

Historically speaking, the period spanning Thanksgiving to the new year has been a great period in which to be a bull. The S&P has gained roughly 2.65% on average over this time frame going back to 1950. The index only fell during this period about 20% of the time, giving it an 80% win rate for bulls.

Conditions are obviously not normal this year in terms of rates, but the same could be said for the market’s current valuation. Stocks haven’t typically been so far below their all-time highs around Thanksgiving. 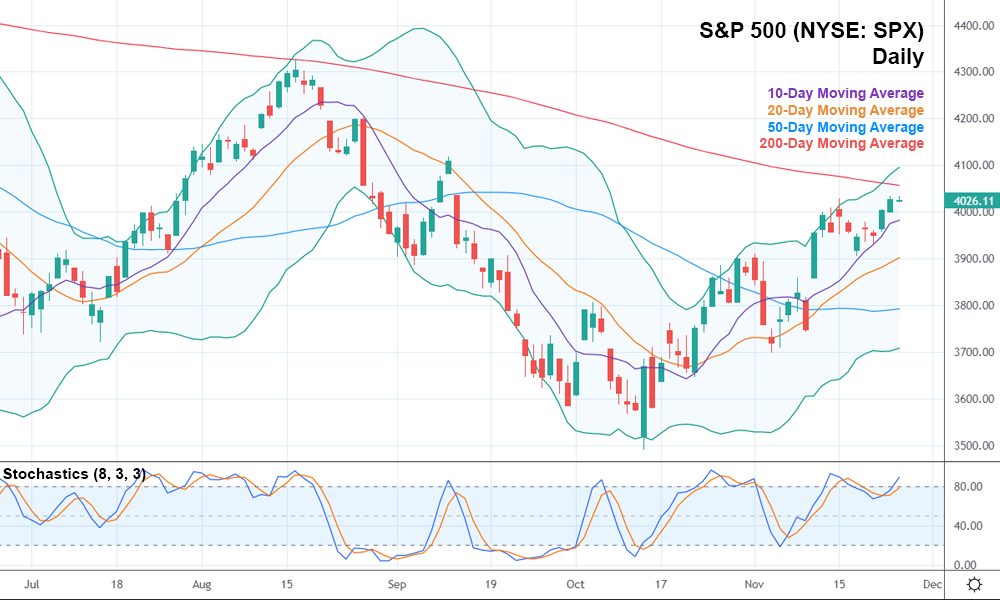 The S&P is inching ever closer to the 200-day moving average, too. The index was stopped at the 200-SMA back in August. Now, though, a breakout above the moving average seems likely. A bad jobs report on December 2nd would probably do it.

If the S&P clears the 200-SMA, the resulting melt-up could be of epic proportions. The stochastic indicator suggests the index is overbought in the short term, but a jobs report-driven short squeeze would be able to overcome that hurdle with ease. 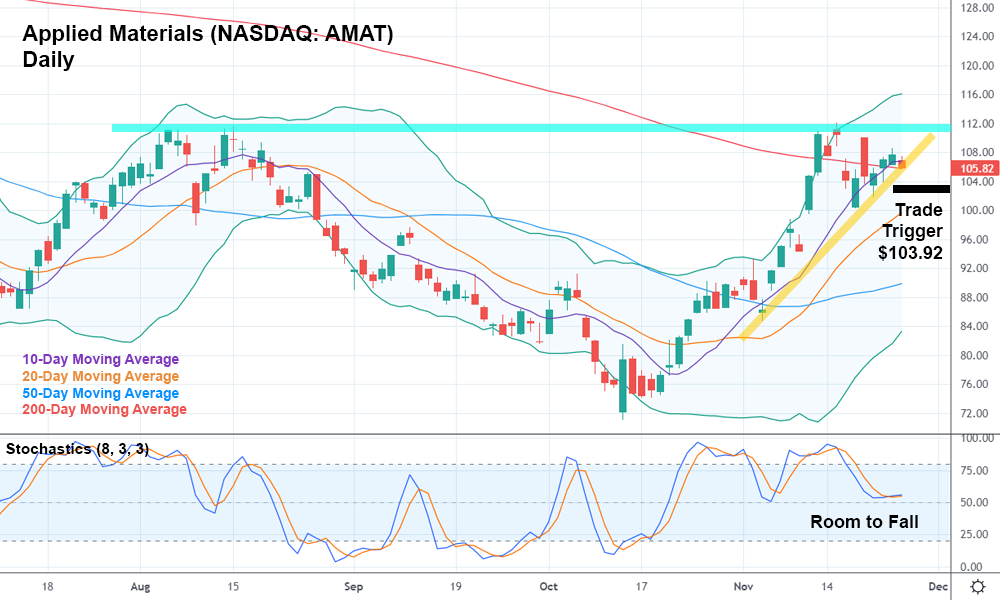 For Applied Materials (NASDAQ: AMAT), though, it’s a different story. AMAT already ran into the 200-SMA but failed to break out above it. The stock also froze at resistance (teal line) before closing before the 10-day moving average this afternoon.

For those reasons, it might make sense to take a bearish position on AMAT with a trade trigger of $103.92, below today’s low, as the general market approaches another “make or break” moment at the 200-SMA.

Stocks rallied this afternoon as bulls attempted to take control. The Dow, S&P, and Nasdaq Composite all rose significantly on a slumping dollar and...
Read more