The “Utility Stock” Bears Are Watching

Sentiment flip-flopped today before the market ultimately closed lower, weighed down by ongoing “Fedspeak” that had traders confused. The Dow, S&P, and Nasdaq Composite opened lower this morning before rallying to trade flat through noon, then fell again into the close.

“It will probably be appropriate soon to move to a slower pace of increases,” Brainard said at a Bloomberg event in Washington.

“But I think what’s really important to emphasize, we’ve done a lot, but we have additional work to do.”

She went on to say that the Fed remains very focused on potential “spillovers” of tightening and that the central bank is aware of risks becoming more “two-sided” due to higher rates.

The two-sidedness here being the market’s propensity to either boom or bust depending on how trends shift. Low liquidity (due to restrictive monetary policy) has contributed substantially to the market’s worsening volatility.

As rates go higher, explosive moves from stocks should only become more commonplace. Brainard said that the Fed acknowledged this, which wasn’t necessarily a revelation. But it is further evidence that the Fed may be leaning dovish for December’s rate increase.

“We’re at a point we can start thinking maybe of going to a slower pace,” Waller said.

Waller and Brainard essentially said the same thing, except Brainard didn’t include any comments on the concept that the Fed’s target rate remains unchanged. 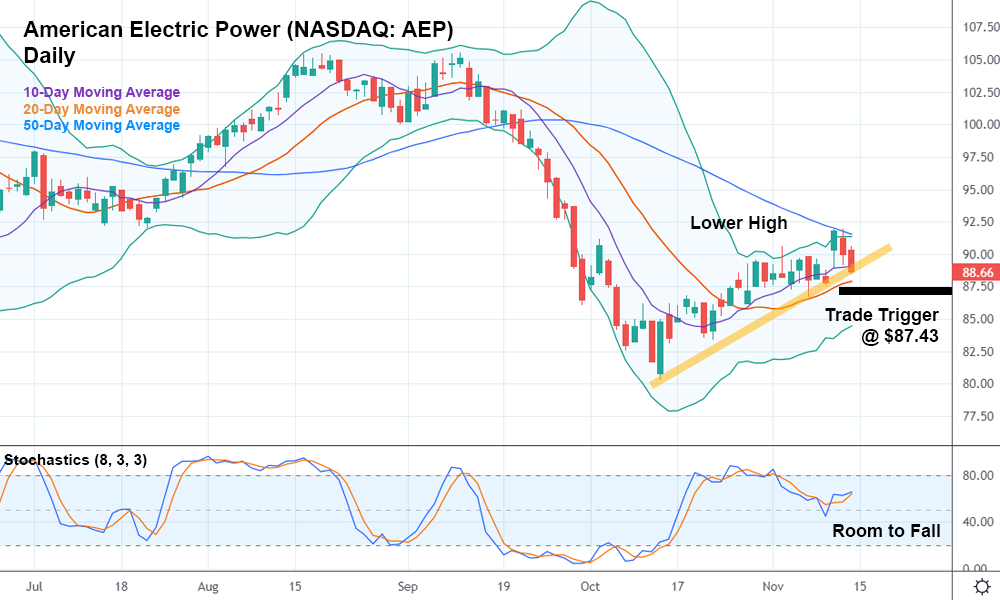 If the rally’s going to stall here, American Electric Power (NASDAQ: AEP) may head lower as well. The stock set a lower high last week before closing below the 10-day moving average this afternoon.

AEP is still trading above its minor bullish trend (yellow trendline), but not by much. The stochastic indicator suggests AEP has plenty of room to fall, too.

For those reasons, it might make sense to take a bearish position on AEP with a trade trigger of $87.43, below today’s low, as the general market looks to reverse this afternoon’s losses.