Uncharted Profits Daily
Thank you for subscribing, please check your email for access
Home Stocks to Watch Amazon.Com's (AMZN) Back Into "Rally Mode"

Amazon.Com’s (AMZN) Back Into “Rally Mode”

Stocks ripped higher this afternoon as the market stretched out yesterday’s big rally. The Dow, S&P, and Nasdaq Composite all gained opposite yields. The 10-year Treasury yield fell to a daily low of 3.56% before rising slightly.

But will the gains stick? Maybe, maybe not. We saw a similar rally a few weeks ago in early September when the S&P rose more than 5% over the course of 4 trading sessions. Then, a massive one-day selloff followed, erasing nearly the entirety of that gain.

The index then endured a big bearish continuation.

Bulls might be getting set up for another disappointing “dead cat bounce” as a result. Wall Street strategists can’t seem to make up their minds about what’s coming next, either.

“After falling more than 9% in September and extending its year-to-date decline to nearly 25% as of Friday’s close, we think the S&P 500 was looking oversold,” said UBS Global Wealth Management chief investment officer Mark Haefele. “In addition, some of last week’s selling pressure may have been driven by quarter-end rebalancing, which has now ended.”

“With sentiment toward equities already very weak, periodic rebounds are to be expected. But markets are likely to stay volatile in the near term, driven primarily by expectations around inflation and policy rates.”

Haefele’s totally right here. The market was ready for a bounce after hitting oversold territory last week. Rates have controlled the market’s direction over the last few weeks, too.

Janney technical analyst Dan Wantrobski gave his own take on the situation.

“For the S&P 500, watch for a potential resistance range of 3800-4000 on further rally efforts,” Wantrobski wrote in a note to clients.

“Beyond that, the declining 200-day MA […] currently resides at 4200- and we would note that this offered stiff resistance to the June rally just a few months ago.”

“Continue to watch for first support within the 3500-3600 zone, followed by 3100-3200 (which we would consider a wash-out range given the extremes in sentiment we have already experienced).” 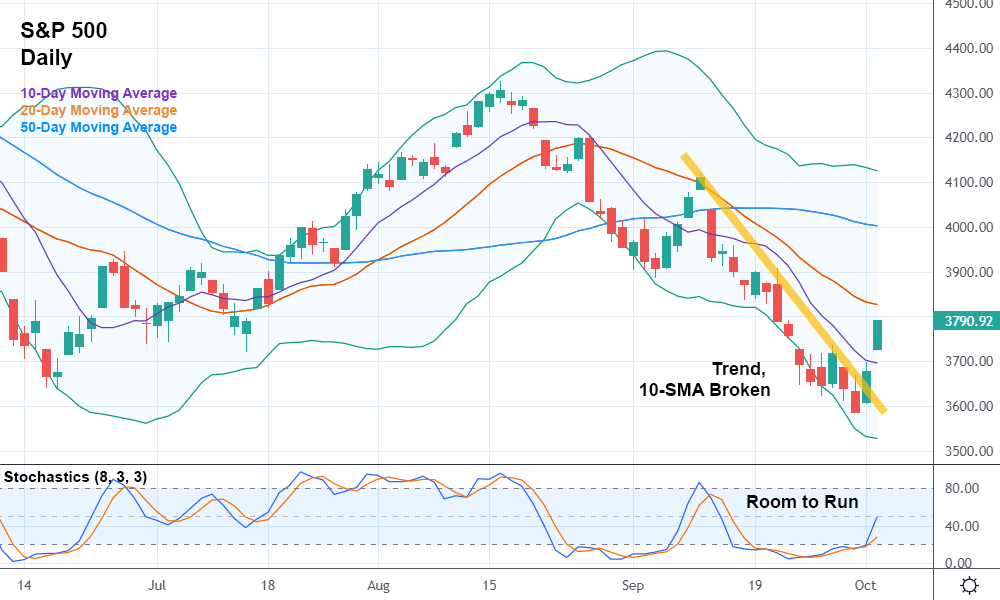 From a trend-following perspective, the S&P has certainly made its case for a trend reversal. The index closed above its bearish trend (yellow trendline) and the 10-day moving average over the last two trading sessions. The stochastic indicator suggests that the S&P has room to run as well. 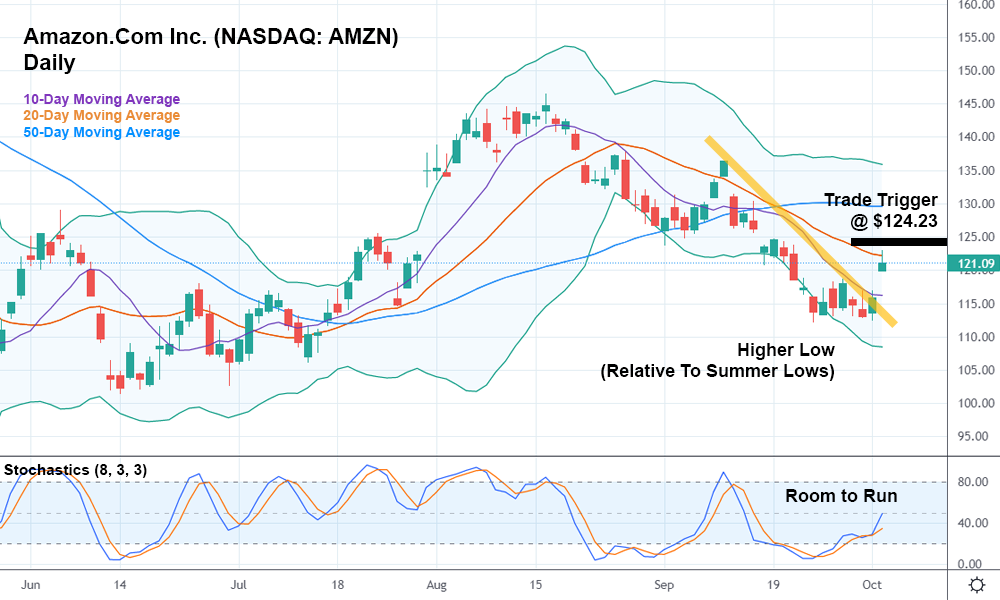 Amazon.Com Inc. (NASDAQ: AMZN) is in a similar predicament. The stock gapped higher today, closing above the 10-day moving average and its bearish trend (yellow trendline). Unlike the S&P, however, AMZN is setting a higher low relative to its summer lows. The broader market index fell slightly below its summer lows by comparison.

That might mean AMZN’s primed for a big rally here should the general market continue to head higher. The stochastic indicator suggests the stock has room to run as well.

For those reasons, it might make sense to take AMZN long with a trade trigger of $124.23, above today’s high, as the general market looks to rebound further.