Stocks flip-flopped all over the place today before ultimately closing lower. The Dow, S&P, and Nasdaq Composite staged a temporary intraday rally that ultimately failed when the Bank of England (BoE) dropped a bombshell on markets.

It all started in late September when the BoE bought UK government bonds (aka, gilts), to prevent a gilt “death spiral.” This happened when the pound crashed in response to Chancellor Kwasi Kwarteng’s disastrous mini-budget release.

The crashing pound triggered margin calls at virtually every UK pension fund, sparking the rapid selling of gilts, driving yields through the roof.

The BoE began purchasing £5 billion worth of gilts daily (restarting QE in the process) to keep the UK financial system intact. We warned that once the BoE halted its QE program, gilts would crash again. The BoE claimed at the time it would stop buying bonds this Friday.

Then, this morning, the BoE announced that it was going to double its bond purchases to £10 billion daily, £5 billion of which would be index-linked gilts (the same ones that caused the problems with pension funds in September).

This caused stocks to rally today before BoE Governor Andrew Bailey pulled the rug out from under bulls with a statement:

“My message to the funds involved and all the firms is you’ve got three days left now,” Bailey said, referencing the BoE’s Friday cutoff for its bond purchases.

“You’ve got to get this done. The essence of financial stability, is that it (intervention) is temporary. It’s not prolonged.”

Will the BoE actually halt its bond-buying programs this Friday? It seems like it can’t do that without risking an epic gilt meltdown.

Analysts were displeased with Bailey’s warning.

“The way that the bank has structured this intervention is they can only buy assets if people put offers into them, but nobody is putting offers in,” said Royal London Asset Management’s Craig Inches.

Inches added that the pension funds would prefer to sell their riskier assets (corporate bonds, property) before gilts.

“If they sell gilts now, they’re doing it in the likelihood that they’ll need to buy them back in the future at some point and they might be more expensive, and that’s unhelpful.” 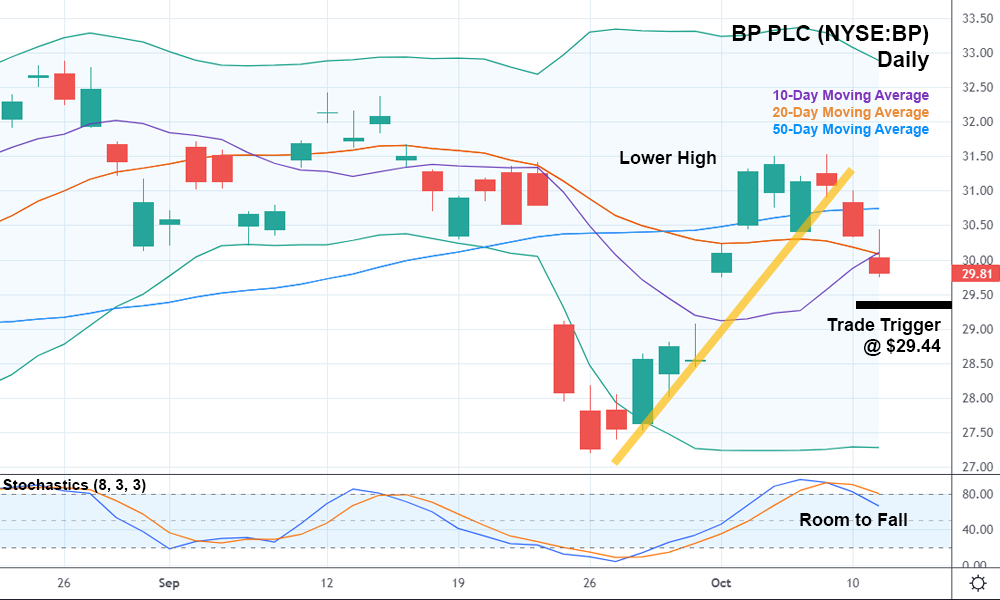 That type of instability is bad for markets, and even less-correlated stocks like BP (NYSE: BP) as well. BP has managed to trade somewhat deliberately over the last few months, making it an attractive option to traders who are sick of the recent volatility.

The stochastic indicator suggests the stock has room to fall, too, and it just recently set a lower high.

For those reasons, it might make sense to take a bearish position on BP with a trade trigger of $29.44, below today’s low, as the general market attempts to unpack the BoE’s latest warning.